With an endorsement by Olivier Blanchard, former chief economist of the IMF 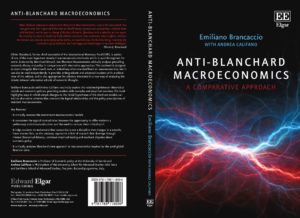 Critical acclaim: “When Emiliano asked me to endorse Anti-Blanchard Macroeconomics, I was a bit taken aback. You can guess why. But I agree with him that we should always question our assumptions, confront them with the facts, and be open to change if the facts dictate it. Questions such as whether we can expect the economy to return to health by itself, whether recessions have permanent adverse effects, whether the interest rate channel of monetary policy works, are essential ones. For the time being, I stand by the conclusions of my textbook, but I am happy and indeed eager to see them challenged” (Olivier Blanchard). “Beyond its provocative title, the Anti-Blanchard raises constructive critiques of our approach to macroeconomics teaching” (Alessia Amighini and Francesco Giavazzi, coauthors of the European edition of Blanchard’s Macroeconomics). “Even if designed for students, this textbook offers food for thought also to researchers interested in reopening a debate on the foundations of contemporary macroeconomics” (Mauro Gallegati). “It is an excellent way to understand both analytical strengths and weaknesses of the mainstream approach” (Tortsen Niechoj). “The Anti-Blanchard increases variety in macroeconomic theory: it shows what is wrong with the dominant theory and draws attention to its alternatives” (Heinz D. Kurz). “The fact that one of the cardinals of pre-crash macroeconomic orthodoxy is willing to commend this heterodox text, is evidence of the mess in which orthodox macroeconomics finds itself after the collapse of 2007-09” (Robert Skidelsky).

Any cookies that may not be particularly necessary for the website to function and is used specifically to collect user personal data via analytics, ads, other embedded contents are termed as non-necessary cookies. It is mandatory to procure user consent prior to running these cookies on your website.