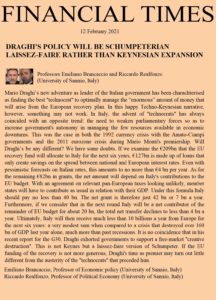 Mario Draghi’s new adventure as leader of the Italian government has been charachterised as finding the best “technocrat” to optimally manage the “enormous” amount of money that will arise from the European recovery plan. In this happy Techno-Keynesian narrative, however, something may not work.

In Italy, the advent of “technocrats” has always coincided with an opposite trend: the need to weaken parliamentary forces so as to increase government’s autonomy in managing the few resources available in economic downturns. This was the case in both the 1992 currency crisis with the Amato-Ciampi governments and the 2011 eurozone crisis during Mario Monti’s premiership. Will Draghi’s be any different? We have some doubts. If we examine the €209bn that the EU recovery fund will allocate to Italy for the next six years, €127bn is made up of loans that only create savings on the spread between national and European interest rates. Even with pessimistic forecasts on Italian rates, this amounts to no more than €4 bn per year. As for the remaining €82bn in grants, the net amount will depend on Italy’s contributions to the EU budget. With an agreement on relevant pan-European taxes looking unlikely, member states will have to contribute as usual in relation with their GDP. Under this formula Italy should pay no less than 40 bn. The net grant is therefore just 42 bn or 7 bn a year. Furthermore, if we consider that in the next round Italy will be a net contributor of the remainder of EU budget for about 20 bn, the total net transfer declines to less than 4 bn a year. Ultimately, Italy will then receive much less than 10 billions a year from Europe for the next six years: a very modest sum when compared to a crisis that destroyed over 160 bn of GDP last year alone, much more than past recessions. It is no coincidence that in his recent report for the G30, Draghi exhorted governments to support a free-market “creative destruction”. This is not Keynes but a laissez-faire version of Schumpeter. If the EU funding of the recovery is not more generous, Draghi’s time as premier may turn out little different from the austerity of the “technocrats” that preceded him.